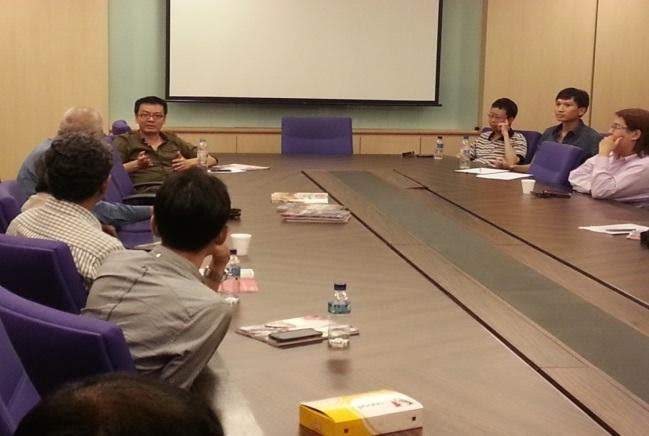 On 11 September 2013, the NUS Economics Alumni held an evening talk and discussion on the topic “Occupational Social Status in Singapore” with guest speaker, Dr. Daniel Goh, Associate Professor of Sociology at the National University of Singapore (NUS). Dr. Daniel Goh is a well-known commentator on socio-political issues and was one of the high-profile faces rolled-out by the opposition Worker’s Party at its Punggol East by-election campaign rallies.

It was a promising intellectual exchange between two different fields of social sciences. The session began with a light-hearted joke (by Mr Chan Kok Hoe) that economics is the discipline that teaches people how to make choices, whereas sociology believes that people have no choice! On a more serious note, Dr. Goh suggested that when it comes to decision-making analysis, economists tend to forget the influence of social and cultural norms.

The topic of occupational social status is one that has gained popularity in recent years with much debate over the issue of minimum wage and influx of foreign workers. Dr. Goh first highlighted that policy intervention has unintended consequences on other aspects of society. To illustrate his point he focused on two particular industries – public bus drivers and hawkers.

Serving more food for thought, Dr. Goh went on to discuss the occupational status of hawkers and the future of our hawker food culture. Traditionally, being a hawker was seen as a respectable occupation. However, it is sad that the hawker industry seems to be declining in popularity with the National Heritage Board trying to actively promote hawker food as part of our cultural heritage to mitigate this decline, albeit without much success.

Dr. Goh identified a few possible factors for the lowering of hawkers’ occupational social status, which makes fewer Singaporeans willing to take up ‘hawking’ as a career. First, the food court boom has led to high bidding for food court space as well as food court companies actively cultivating a more high-class image of food courts relative to hawker centres so as to attract more customers away from hawker centres. Second, the relatively more successful hawkers venture into food courts by franchising their business, which develops a socially constructed market hierarchy of graduating from hawker stalls to food courts.

Third, the government’s regulations have made it harder for hawkers to make a sustainable living. Dr. Goh cited examples of government regulations such as hawkers being recommended to freeze prices especially when the price pressure comes from increased rentals, hawkers at Serangoon Gardens having their thumbprint scanned before they can open their hawker stall for the day (to prevent hawkers from illegally subletting their stalls), etc. All these regulations have made ‘hawking’ more cumbersome. The interplay of these factors has unfortunately led to a decline in the quality of hawker food and there is even talk to preserve ‘hawking’ as a heritage as though it is becoming extinct.

Children of hawkers nowadays do not want to follow in their parents’ footsteps, a stark contrast from the past when it was commonplace to hear of sibling rivalry over who will inherit the hawker stall of the parent. In his concluding remarks, Dr. Goh urged policymakers and academics to reevaluate policies so that they treat labour as social subjects and not as mere manpower issues.

This article was first published in ECONews in December 2013